Many people view the best response to climate change as inaction as if humanity should stay out of nature's way and stop interfering. Our growing world has growing demands for food, water, and other natural resources which seem at odds with conservation efforts. It doesn't have to be man vs. nature. Humans are a part of the natural world and should learn to live sustainably within it. Innovations in the way we view ecology and agriculture have led to amazing projects that seek to both serve the needs of people and rehabilitate ecosystems. 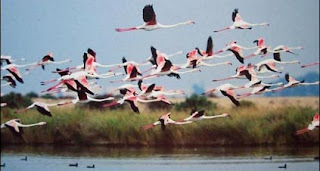 New York chef Dan Barber challenged what it meant to produce a sustainable food product in his wildly popular 2013 TED talk titled "How I fell in Love with a Fish." In this talk, Barber introduces a western audience to Veta La Palma, a fish farm in southern Spain. Not just a fish farm, this is a 28,000-acre wildlife sanctuary and ecological preserve. Historically, farmers built extensive canals to drain the entire area and make it habitable for raising cattle. In 1990, the local rice company PIMSA, in partnership with local ecological authorities, used the canal system to re-flood the region creating a network of aquaculture ponds and islands. 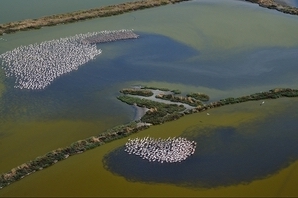 The fish are native species raised by biologists on a diet of natural algae until they are mature enough and released into the free-flowing system. The estuary is so abundant in natural resources that once released the fish eat what they would in the wild including shrimp, smaller fish, and aquatic insects. Over 250 species of waterfowl nest and feed in this rich environment including a flock of flamingos that make a 300-mile journey each day to feed here. This ecological and agricultural activity is not just producing food, it's helping to clean water and provide habitat for over 50 at-risk species of bird. The project has been massively successful, and Veta La Palma has now expanded from fish farming into rice production, livestock, and dry land crops.

There are few images more iconic to America than a herd of bison thundering across the midwestern prairies. Thanks to the Partners for Fish and Wildlife Program, The Nature Conservancy, the Friends of Nachusa Grasslands, and the U.S. Army Corps of Engineers that is becoming a reality again. Since 2013, ecologists have shaped the land for hydration and re-seeded 3500 acres of Illinois to rekindle native grasslands, wetlands, and forests. They have reintroduced over 100 native plant species. Ecologists released 30 bison into the habitat in 2015. Today, the herd has grown to 90 healthy individuals. The animals are attracting attention near Sioux City, IA where cars line up to see them.
After over 100 years of agricultural abuse, this region is getting a taste of a future dedicated to healthy diverse ecosystems. Only about one 100th of one percent of native Illinois prairie land hasn't been converted into farmland. Projects like this one seek to increase that prairie land. They are also challenging what it means to farm vs. restore wilderness. The Nature Conservancy is considering selling some of the animals for meat in coming years. If ecologists steward the wild herds and harvest food from them the way the Native Americans did pre-colonization, is that not conservation and agriculture at work? 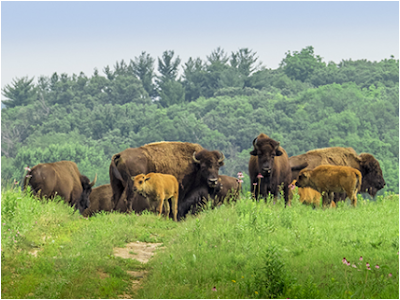 According to the U.S. Fish and Wildlife Service, "What once was a cornfield, is now a diverse ecosystem that provides habitat for thousands of native species, including sandhill cranes, state listed Blanding and yellow mud turtles." 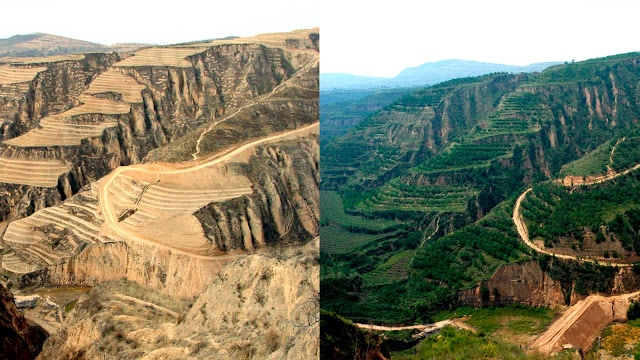 The restoration of China's Loess Plateau has been a two-decade-long lesson in land degradation and rehabilitation. It has taught the world about economic and cultural impacts destructive farming, and grazing, have on a region. Chinese American filmmaker and ecologist John D. Liu documented this effort since it began in 1995. The Loess Plateau is a 250,000 square mile sedimentary deposit of rich fertile soil. People have lived here for 1.5 million years according to the fossil record. Agriculture had taken its toll on the plateau for 10,000 years, leaving the residents with degraded soils and yearly flooding.
Through offering tenure for the farmers on the land and compensation for lost income, the Chinese government convinced many of them to give up their tilled fields and plant trees. They shaped terraces on the hills and integrated watershed management. The government banned free range grazing resulting in setting ecological areas apart from economic land. The Loess plateau has gone from what looked like a desert ruin to a thriving agricultural and ecological economy due to these efforts. Through integrating the people and the restoration effort, farmers became educated about proper land care and sustainable agriculture. According to Liu, the local resident's incomes have nearly tripled since the project began and local markets are full of grains, meats, fruits, and vegetables. 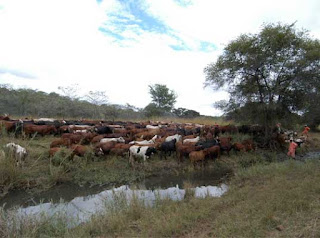 The ranch at the African Center for Holistic Management (ACHM) is a 3200-hectare learning site partnered with the neighboring 40,000-hectare Hwang communal lands. This project reaches far beyond its physical borders with education and has roots throughout Africa, North and South America. Allan Savory gave a heart-wrenching TED talk in 2013 describing how he conceived of the practice of managing grazing animals to help repair the very land desecrated by bad grazing habits. Rehabilitating the land while maintaining local economies through keeping livestock is essential for communities and farmers who depend on cattle for a living. 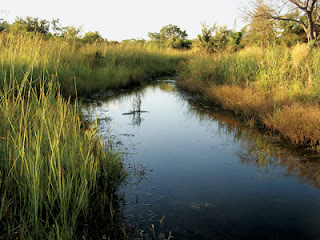 Cattle, sheep, and goat herds at the ACHM ranch, are intensively managed in numerous paddocks designed to prevent overgrazing. Savory intended to imitate the patterns of natural herds in Africa. Moving the livestock quickly through an area allows them to trim perennial grasses, stomp down dead organic matter, and break up soil without causing damage to the ecosystem. If farmers manage their herds in this way, they don't have to burn dead grasses at the end of the year, and they maintain a healthy ground cover. Many of the cattle at the ranch belong to residents of Hwang who now help to demonstrate and teach the knowledge to students of the center. Local vegetable and fruit farms are also benefiting by allowing ranchers to use their fields as short-term paddocks. According to the ACHM website, paddocks of land that had not grown vegetation in 30 years have a cover of grasses and forage after just two years of holistic management. Rivers and seasonal pools are storing more water later into the dry seasons.

This project is small, but the implications of it are massive for drought-stricken countries. Geoff Lawton and his Permaculture food forest videos have gained popularity in recent years. Known throughout the permaculture community as 'Greening the Desert,' this project is one of Lawton's food forests in the heart of Jordan's Dead Sea Valley. While only residing on one solid acre of land, the forest features an overstory of date palm with a multi-species understory including olives, fig, jojoba, passion fruit, custard apple, mango, carob, banana, cactus, and grape. These foods are grown without commercial inputs like fertilizers or soil and produced using far less water than other farms in the region. Through harnessing fungi and moisture retention, salt content has decreased over time in the site's soil composition attracting the attention of local conventional farmers. 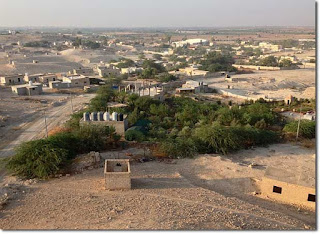 Using a contour-based swale system helps the site conserve more water proportionately than commercial farms. Through implementing a multi-species food forest, the shade provided by overstory plants prevents moisture from evaporating helping contribute to water retention. The property also features a sustainable off-grid lodge with gray water systems, passive air conditioning, composting, wood heated water, and a classroom facility. Food forest technology is simple and accessible to most people around the world with a bit of education. It has the potential to rehabilitate regions struck with desertification and exemplifies a better agriculture for the entire Middle East.

These projects demonstrate how human ingenuity can play an essential role in re-greening the earth and producing sustainable food. As nature changes, man's relationship with all of his resources change. Sustainable agriculture and ecological conservation can work together in creating abundant ecosystems which feed people, provide habitat, and preserve nature.

"Hope in a changing climate - the Loess plateau revisited, and other examples of earth healing," The Permaculture Institute, October 1, 2010